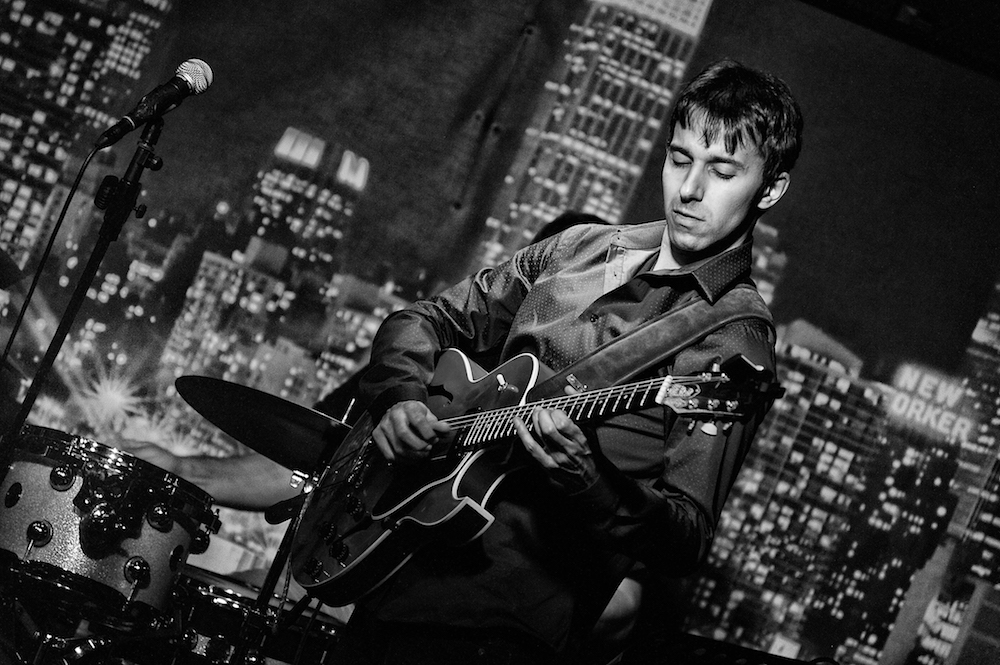 “Dario Chiazzolino represents the significance of virtuosity in the guitar world and is one of a few making history.”
Hadrien Reed, Vocal Media, August 26, 2022 (USA)
Read full publication

“Dario Chiazzolino is known for his virtuosic guitar playing in the European and world jazz scenes. He has earned a reputation as a phenomenal guitarist. This rests on an appreciation of his innovative improvisational skill, which is founded on intervals of 10th, 11th, and 13th notes.”
Guitar World – February 19, 2015 (USA)
Read full publication

“Dario Chiazzolino is one of the country’s and world’s for that matter, leaders on his instrument.”
Jim Hynes, Glide Magazine – June 10, 2020 (USA)
Read full publication

“Dario Chiazzolino is in the line of the greatest jazz guitarists and composers. A truly great musician with big ears and big heart.”
Andy Sheppard – saxophonist, composer, arranger

“The only one establishing a mix of straight ahead and modern jazz with a unique flair”
Shuichi Hashimoto, Jazz Guitar Magazine – November 2019 (Japan)

“Dario Chiazzolino is a dynamic and colorful guitarist and composer. He paints a compelling picture with his music.“
Bob Mintzer – saxophonist, composer, arranger

“A musician with an extraordinary mix of talents: musical sensibility, perfect pitch, virtuosity, and considerable skill both in composition and arrangement. Dario Chiazzolino, though young, has become an important influence in the guitar world.”
Antonello Versi, Accordo – February 4, 2015 (Italy)
Read full publication

“Guitarist Dario Chiazzolino impresses not only with his sophisticated technical skills but also as a composer. Dario turns out to be a true master in composing catchy and sinuous themes. Chiazzolino wins thanks to his relaxed playing and his smooth compositions. Here is a new star in the jazz firmament.”
Richman, Guitarmania – October 3, 2015 (Austria)
Read the full publication

“Italian Jazz Star Dario Chiazzolino is one of the greatest guitarists of the last generation. He is internationally acclaimed thanks to his phenomenal playing and his innovative way of improvising.
He shows not only an unrivaled mastery and technique of the instrument but also the capacity to give his performances a powerful emotive impact. He has established himself in the jazz world with a style and musicality also recognized on the other side of the Atlantic.”
Billboard – April 2015 (USA)

“He plays jazz that captures the storming jazz-rock fusion of the early seventies alongside up-to-the-minute modern grooves and contemporary styles. Dario Chiazzolino has a dazzling technique and plays with both power and taste.”
Adam Sieff,  London Jazz News – September 7, 2020 (UK)
Read full publication

“Dario Chiazzolino is a guitarist with a clean, fluid sound, a crystalline clarity, and a marked blues tinge that witnesses his African American influences, which he has modernized with the balanced use of melody and improvisation. The title track of his latest album, Paint Your Life, best represents a musician’s technical and artistic distinctions with evident international significance.”
Flavio Caprera, Jazz Convention – November 24, 2014 (Italy)
Read full publication

“Dario Chiazzolino has created quite a name for himself along the pantheon of today’s greatest guitarists. The ability of Dario to create music that works on its own and as part of a greater collective.”
James McQuiston, Neufutur – April 22, 2015 (USA)
Read full publication

“Jazz guitarist, with a strong personality and a well-defined style. His style has become famous thanks to his innovative improvisation. His approach is undoubtedly new: though it remains within the jazz tradition, Dario integrates tenth, eleventh, and thirteenth note intervals, which gives his playing a unique spaciousness and absolute originality.”
Franco Giacomozzi, GuitarList (Italy)

“Dario Chiazzolino is a great jazz guitarist and composer from Italy, He is a player that has the gift and touch of the real cats, like John Coltrane, Charlie Parker, Bill Evans, Pat Martino.”
Jason Macedo, The Sound Guitar Magazine – January 2015 (USA)
Read full publication

“Though he has plenty of technical talent, Dario never lets himself devolve into characterless playing. Instead, he seeks a balance between single notes and phrases that create exciting solos perfect in their thematic and narrative proportions when combined with his strong poetic sense.”
Comunicati Musicali (Italy)
Read full publication

“For all guitar fans, Dario Chiazzolino has been a significant figure for years: exemplary technique, control, sound, and personality are the virtues of this musician, who has been impressing the jazz world for years and has a rich and prosperous career ahead of him. Dario Chiazzolino is an impressive artist who plays his instrument magnificently and writes meaningful music.”
Franco Mareschi, Mescalina – November 17, 2014 (Italy)
Read full publication

“Dario Chiazzolino brings out a soloistic eloquence, at times prolonged and intense, at others tight and with clear bebop influences. He smartly develops a lyrical and evocative solo and, only when necessary, accelerates and creates an emotional tension.”
Stefano Dentice, Extra Music – January 15, 2015 (Italy)
Read full publication

“Chiazzolino has an inherent lyricism and clean touch to his solos. He’s got a tone that’s as clear as a bell from a basilica and chops that will make you swoon.”
George W. Harris, Jazz Weekly – April 5, 2015 (USA)
Read full publication

“This guitarist is outstanding; he delights in a setting where rhythm comes together with harmony and color to give life to a compelling swing.”
Culture Jazz – Thierry Giard – December 3, 2014 (France)
Read full publication

“Dario is (easily) able to wrap you right into his string spell; you won’t go looking through the record racks any time soon, as you’ll be so absorbed with his excellent and expressive playing that you won’t be able to do anything else for a good long while. I give Dario a most highly recommended, with an “EQ” (energy quotient) of a (perfect) 5.00, which means that it’s also a “PICK” for best guitar jazz!”
Dick Metcalf, Cadence Jazz  – April, May, June 2015 issue (USA)
Read full publication

“Dario Chiazzolino is one of the more precocious young stars; he has forged an impressive career as both leader and sideman. His music is part of a wider approach to jazz that embraces folk and classical sounds. Dario is great at holding the band together and can really impress when given a solo spot.”
Nick Wells, Guitar Collector Magazine – March 2015 (UK)

“Dario Chiazzolino, with his relentless passion, has already earned some prestigious honors. His style is marked by the right balance between technique and melodic awareness; his touch is confident and expressive.”
Gaetano Valli, Axe – February 2015 (Italy)

“What really strikes about Dario – in addition to his extraordinary technique and his innate improvisational skills – is the voice of his guitar, unique, deep, dynamic, expressive, and evocative. A sound really capable of capturing the listeners and making them dream.”
Giuseppe Ortice, Eventi Culturali Magazine – April 2016 (Italy)
Read full publication

“His style is fluid and trenchant, capable of interpreting modern jazz language with distinctness and grace. His phrasing, varied and mature, creates compelling dynamics as it retains full rhythmic control. His real musicality is vibrant and pleasant to the ear. Regarding composition, Dario demonstrates an outstanding balance and the ability to recognize the right thematic line to characterize his arrangements.”
Stefano Tavernese, Chitarre – January 2015 (Italy)

“His fame has reached beyond his national borders, as he has recently toured Europe and received the endorsement of an important instrument firm. His sonority, sharp and aggressive, can be compared to that of John Scofield, and his phrasing is an intimate synthesis of the contemporary evolutions of jazz guitar.”
Giovanni Monteforte, Archivio Chitarristi Jazz – March 2010 (Italy)

“Chiazzolino’s phrasing sustains this unity most – precise, measured, and expressive in its touch, expressed according to a profound knowledge of music.”
Gerlando Gatto, A Proposito di Jazz – March 16, 2015 (Italy)
Read full publication

“A closer listen reveals a rare depth of passion and sublime musicianship. The instrumental and compositional acumen he displays extended his reach beyond the borders of his homeland.”
Ed Kopp, Jazziz – Spring 2015 (USA)
Read full publication

“Dario Chiazzolino has thrown open the doors of the process to invite you, the listener, to experience the entire experience. My hat’s off to him in a big way. Along with his openness, his “no frills” approach greatly appeals to me.”
Matt Ward, Detroit Jazz Magazine –  (USA)
Read full publication

“The first time I heard Dario Chiazzolino, the things that hit me the most were the warm jazz guitar sound he has and the maturity and elegance of his phrasing. Dario is a solid player who can really swing. As a composer, he writes beautiful melodic tunes that are subtle and refined. It is a real pleasure for me to perform with him on stage.”
Dominique Di Piazza – bassist, composer, arranger

“Dario Chiazzolino is simply a prodigy. He is a genius of the guitar.”
Carlos Domingo – journalist (Argentina)

“Dario Chiazzolino is one of the greatest Italian guitarists; he has become an international authority very early and has established himself thanks to his extraordinary abilities.
His dynamic range and his melodic lines well describe his height.”
Ettore Garzia, Percorsi Musicali – October 24, 2015 (Italy)
Read full publication

“Although he is still very young, he already has an intense professional activity behind him at an international level, which allowed him to develop a full artistic maturity early on. Entirely at ease in the most diverse situations, he always brings out his extraordinary musicality without exceeding in virtuosity, even though he has uncommon technical skills. There is never a note too many in what he plays. There is a positive feeling that everything is always under control.”
Corrado Abate, Jazzcom – 2015 (Italy)
Read full publication